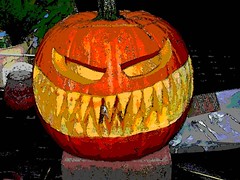 Photo by Randy, Son of Robert

It’s Halloween all October on Radio Drama Revival! The third annual scary stories month has tales from both coasts of America and far abroad, culminating in a spooktacular live Halloween radio drama that will be aired live from the University of Southern Maine in Portland, Maine.

The month comes quick and fast… Don’t miss any of the gore-ious audio treats.

October 1 – “When Yellow Casts a Crimson Shadow” by 19 Nocturne Boulevard
What starts as a bizarre and troubling dream soon leads to a high body count in this homage to Giallo thrillers. Leather-gloved killers, bad dubbing, and hot chicks in danger.

October 8 – “The Grim of Stoddesden Hall” by The Wireless Theater Company
The body count adds up fast in this haunting and hilarious tribute to Edgar Allan Poe.   In a remote and crumbling gothic mansion in the country, the slighted caretaker takes out his misgivings with a very sharp shovel.  Sadly, the police are not so sharp.

October 15 – Nightmares on Congress Street by Bill Dufris
Well known and acclaimed audiobook narrator Bill Dufris is also a hell of an audio producer and a fan of the macabre.  His already has two excellent collections out there – Nightmares 4 and 5, and we’ll be hearing two stories rarely heard before: “The Nephews,” by Rick Hautala, and a haunting Tale from the Crypt.

“The Nephews,” by Rick Hautala, and a

October 22 – “Sorry, Wrong Number” by FinalRune Productions
FinalRune Productions and The Mad Horse Theater Company team up for their second collaboration tale, a production of the radio classic by Lucille Fletcher. A woman overhears two men plotting a murder over the telephone, and very quickly her whole world starts to unravel.

October 29 – “Listening in the Dark” by the Icebox Radio Theater
Three tales from Northern Minnesota to chill you to the bone. A writer’s notes from a haunted house turn against. A man gets haunted in his fishing shack. Santa Claus may not be who you thought he was.  Jeff Adams shows off his incredible skill in the darker arts in this haunting hour-long special.

Halloween Night – Live radio drama special! 7-9PM EST in Portland, Maine
FinalRune Productions puts on an evening of audio horror with stories near and far afield – tales of haunted houses, undead lovers, ghosts on a Maine lake, and, oh yeah, zombies! A benefit for WMPG, and yes, you can stream it!!! – see the FinalRune website for more details.