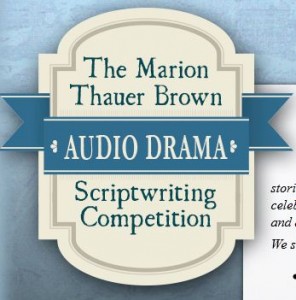 Congrats to our pal Mike Murphy, who wins the Marion Thaeur Brown Scriptwriting Competition!  For an example of Mike’s work, check out the piece “Wish You Were Here” produced by our friends Aural Stage Studios:

In a national dramatic writing competition where the stage is of the ears and mind, two writers, Mike Murphy of Medway, Mass. and Audra Puchalski of Ann Arbor, Mich, won top prizes for their original audio drama scripts.

“I was really happy with the number and caliber of entries we received,” said Will Anderson, creator and administrator of the Marion Thauer Brown Audio Drama Scriptwriting Competition. “I think the entrants and judges did a great job to make this competition a success.”

Murphy’s entry, “The Return of Cosmo Draper,” which received first place and a $250 prize, tells the story of a newspaper reporter’s attempt to buoy up an economically depressed town by planting stories hinting at the return of a local celebrity thought by all to be missing in action since the Vietnam War.

Puchalski received an award of $100 for her script, “Roxy Archer, Private Eye,” which harkens back to the hardboiled detective stories of the 1940s.

Anderson, an associate professor in Central Michigan University’s School of Broadcast and Cinematic Arts located in Mt. Pleasant, Mich, said he created the MTB Scriptwriting Competition in memory of his grandmother, Marion Thauer Brown, who was his biggest supporter when he first started writing radio drama scripts in the mid-1990s.

“Having been lucky enough to win a couple of national audio drama scriptwriting competitions, I wanted to give something back.” Anderson said. “I spent about a year planning and getting input from people who have run them. I had bigger plans for promoting the MTB script competition with ads in Writer’s Digest and the like, but finally realized I could spend another year planning or just jump in and get the competition running by promoting it to the best of my ability on the Internet and see how it panned out.”