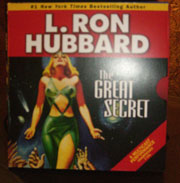 Gosh, it makes me feel like a real celeb!

I just got a personalized letter from John Goodwin, President of Galaxy Press, publishers of the outstandingly vast collection of L. Ron Hubbard’s short stories in semi-dramatized format.

What? L. Ron Hubbard in audio? Well, if it’s news to you, it means you missed their awesome ink in the latest Audio File Magazine which is a bit of a crime for the audio drama enthusiast to begin with.

Anyhoo, the gig is that they’re releasing some 80+ audiobooks over the next six years, based on short stories Hubbard wrote in the 40s in the classic pulp style — you know, beefy dude and busty babes, situations of derring do and villians that are about as deep as a puddle and meaner than a pitbull.

The copy they sent me is “The Great Secret,” and so far I’ve gotten as far as the title track and was really impressed by the professional sound, tight writing and even, a little bit, by the story.

When I say “semi-dramatized,” I mean the story is told with a narrator, but spruced up with music and some effects (the haunting wind in this one). That lends to a more robust experience than the traditional audiobook but you’re still hearing one guy talking for most of it. But don’t worry — the narrator, Bruce Boxleitner, does a hell of a job at it.

I’m not sure if this is the kind of material for the ‘pod (or, indeed, if they’d even be game for having it on there) but it’s a great listen if you have an insatiable craving for above-average punch you in the guy genre stories. No fussy magic realism post-modern fuzzy limp-wristed nihilistic bohemian hip crap here.

There’s a great website at Golden Age Stories to learn more, and if you want a taste of it, you can hear their free podcast. They’ll even let you sit-in for a recording session if you’re in the LA area!

I hear there’s more to come, and stuff spanning mystery, adventure, fantasy and western in addition to sci-fi. For stories that have a real OTR/classic pulp flavor but take full advantage of modern recording, this stuff pulls it off better than anything I’ve heard so far.

And no, I don’t think you’re automatically converted to Scientology if you listen to it.