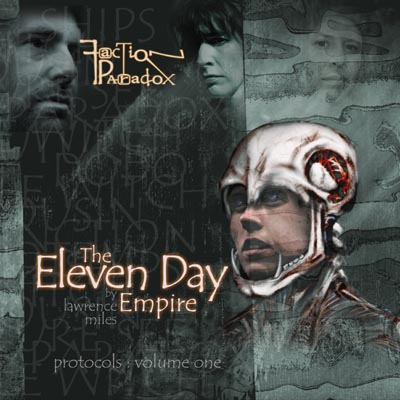 Audio track 1 from The Faction Paradox Protocols: The Eleven-Day Empire (the first episode of the first series) appears courtesy of Bill Baggs of BBV media, copyright 2001. Click the CD cover to go directly to the BBV website. 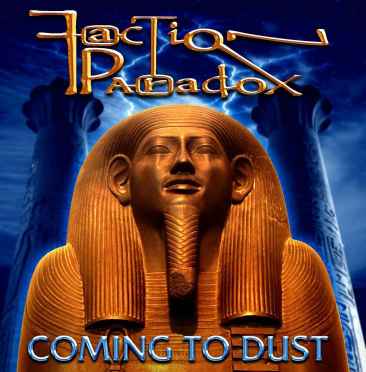 Audio Track 1 from The True History of Faction Paradox: Coming to Dust (the first episode of the second series) appears courtesy of Alan Stevens of Magic Bullet, copyright 2005. Click the CD cover to go directly to the Magic Bullet website.

How to introduce Faction Paradox?

On the one hand it’s best to discover and unravel its mysteries yourself, on the other without some knowledge of its parent series, Dr. Who, you are at a disadvantage – one that a short field guide could easily remedy. Neither approach is entirely sufficient, so why not have both?

Today’s post is for the Romantics, detectives, and explorers. I’m reprinting Lawrence Miles’s “Faction Paradox – As Much as It’s Known”, an introduction which captures the cryptic poetry and subversive humor of the series. I’m also putting up the first tracks from each of the audio drama lines, BBV’s The Faction Paradox Protocols and Magic Bullet’s The True History of Faction Paradox. No context or backstory today – just let the opening lines engulf and enchant you the way only beginnings can, as in Italo Calvino’s If on a winter’s night a traveler.

Next week I’ll post a rough guide for the practically-minded. It will lay out some basic history of the series, highlight important themes, characters, and concepts, and comment on the strengths and weaknesses of the audio dramas. You can think of it as a thread leading you through Miles’s lexical labyrinth. Or if you’re not a fan of Theseus, you can think of it as a crude form of cheating.

(I will, however, try not to spoil major plot elements of the series.)

Finally, a brief primer on Dr. Who audio drama spin-offs can be found in last week’s post.

Faction Paradox, as Much as It’s Known

(Series introduction by Lawrence Miles, originally posted on the now-defunct Faction Paradox website, factionparadox.co.uk. Don’t link there – the domain has been taken by spammers.)

It’s never easy, explaining Faction Paradox in a single line. It’s been described as a criminal syndicate, with agents operating in every civilisation from the first to the last; as an all-purpose guerrilla organisation, intent on overthrowing the order of history-in-general rather than any specific government; as a fetishistic death-cult, whose members remain utterly unaware of its founder’s true intentions; as a secret army, preparing for the day when it can launch a mass crusade against any other bloodline that stands in its way; even as a conspiracy of monsters, whose purpose is to stir up a War in Heaven and then pick over the ruins. And none of these descriptions are entirely untrue, although all of them fall short of the mark.

If the aims of this group/ cult/ organisation are vague, then at least its roots are well-known. The Faction started life as the bastard offspring of one of the Great Houses – the Houses being those aristocratic bloodlines which have, since long before the rise of the “lesser” species, seen it as their duty to oversee the structure of causality – and in human terms even describing the Houses is a challenge. To call the members of these bloodlines “another race” or “another species” seems to miss the point, somehow: the continuum has depended on their presence for so long that thinking of them as “just a different kind of people” is like thinking of gravity and entropy as different kinds of people. More than anything, the Great Houses have to be considered a force of nature, their roots intertwined with the roots of the Spiral Politic itself. And as for Faction Paradox- reviled and rejected by the other Houses, its members regarded as subhuman by beings who already regard humanity as beneath contempt, it’s hardly surprising that the “lesser” species should have such trouble trying to make sense its methods and principles.

Even before the outbreak of the ‘War in Heaven’, Faction Paradox was regarded as the most unpredictable (and opportunistic) of the time-active powers. Aware of the precarious nature of history – but under no obligation to protect it – while the other Great Houses were still attempting to uphold a ‘universal order’, the Faction was following its own, far more ambiguous, protocols. Ruthless, secretive and at times difficult to understand, it’s hardly surprising that the Faction should have eventually found itself under siege from its rival powers…In essence, though, this is how things stand. The Great Houses consider themselves to have jurisdiction over the length of linear time, to be above the “lesser” species in virtually every respect and to act according to age-old protocols which have very little to do with any human sense of morality. At its most basic level, Faction Paradox is the “fallen angel” among Houses, a cuckoo-bloodline whose purpose is to defy, corrupt and subvert the authority of the ruling elite wherever possible. So depending on whom you believe, this corruption is either a bold revolutionary statement or merely a way for the elders of the Faction to fulfil their own ambitions. Certainly, it’s undeniable that among the “lesser” species the Faction has a tendency to recruit the criminal, the dispossessed and even the insane- and has no qualms about this at all.

Sometimes it seems as though the Faction’s simply playing a game, or perpetrating an enormous practical joke against the will of the Houses. Sometimes it seems as though the organisation’s just biding its time while its builds up its forces, ready for the day when it can launch its grand assault against the Houses and overthrow the protocols forever. The truth, if there is any, remains vague- and vagueness has always been the Faction’s area of expertise.