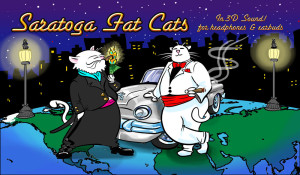 A huge pleasure to play this re-dux of one of the ZBS Foundations’ most lust field-recorded stories.

Willie, who paints houses, is hired by some rich guy to repaint a few rooms in his summer mansion. His girlfriend, a wet T-shirt model for Sports Illustrated, can’t stand the colors. Her name is Christy St. Nichols, she’s a pretty down-to-earth gal, she knows the sexy modeling she’s doing is simply fulfilling unfulfilled male fantasies.

One day someone shoots out the windows in the summer mansion. Seems like the rich guy, Lucas Trust is his name, may have been involved in something that wasn’t all that up & up. Since Christy is allergic to cats, Lucas gives the gardener, his name is Shades, his two fat pussy cats to take look after.

Willie loves to read cheap pulpy detective novels, his favorite is a P.I. by the name of Short Top Detroit. When he almost gets blown up with a car bomb, along with Lucas, it so shakes up Willie, he’s now hearing Short Top inside his own head.

The sound is warm and intimate because it was recorded with Fritz. To hear the 3D effect, listen with headphones or earbuds. It’s probably the most realistic, natural sounding production we’ve ever done. Mr. Fulton wrote it specifically for Mr. Fritz.