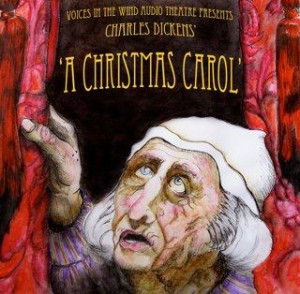 This week we feature the work of Voices in the Wind, a group based out of Toronto, CA who are producing their own original material as well as classics, such as we’ll hear today, “A Christmas Carol.”

You know the drill, Ebeneezer Scrooge is a jerk and his life is transformed by a bunch of ghosts. It is a haunting tale of wrongdoing and redemption that resonates with the ages, with some 40+ adaptations currently available in audio and many more produced through the ages. In fact, our friend Craig Wichman has compiled a text JUST covering this topic, “Standing in the Spirit at Your Elbow: A History of Dicken’s Christmas Carol as Radio/Audio Drama.”

“Voices” rendition leans towards the traditional, embracing the ‘ghostly’ part of this ghost story of Christmas. Also don’t miss their Moonlight Audio Theatre app which has tons of selections of audio programming for your enjoyment.