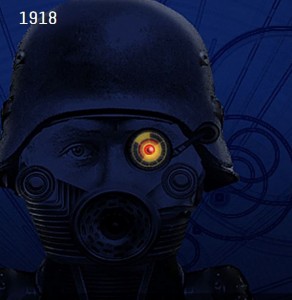 This week, in a sorta-kinda-oddly-tribute to the start of the “Great War” we feature the oddball saga “1918” by our friends at Aural Stage Studios.

Premise: It is 1918 and aliens have crash landed on the planet. At the climax of World War I, Central Power and Allied scientists are racing to find uses for alien technology. Triplanes and Sopwith camels are rigged with laser systems. Believed dead after being shot down, Manfred Von Richtofen, the infamous Red Baron is restored to health as a cybornetic robot and enlisted to aid Germany in it’s quest to fight the return of the aliens. But the key to their quest lies in the hands or rather the voice of a talented, capable and tenacious vocalist, Evelyn Ceriwyn, and the bumbling, but charming scientist, Dr. Henry Isotope.

Also! We talk up our friend at Our Fair City and the upcoming Indiegogo campaign for the Witch Hunter expanded audio saga – check out: http://igg.me/at/witchhunter