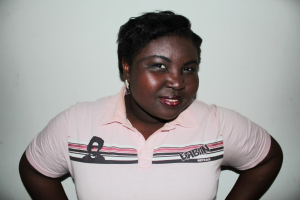 We finish our focus on the darkly hilarious portraits of post-recession Dublin in Gareth Stack’s “Any Other Dublin,” a delicious field-recorded comedy-satire series.

Martha is a Tech entrepreneur and divorcee, who owns and runs her own Web 2.0 business – WebbildyBooboo.ie. Martha considers herself an inspiration to women everywhere, especially her many loyal minionsemployees. Marta is raising money for charity, hoping to raise enough to get a free cycling holiday in France.

Meet Fatuma Abdullai, a bright brash energetic new Irish citizen. Join her as she seeks love in the big bad city, in the final episode of Any Other Dublin.

Fatuma is a recent immigrant from the African nation of Liberia. Fatuma runs her own mobile phone and religious accessory store on Moore St. Fatuma is a Charismatic Christian with an interest in angels and spiritualism. Fatuma is a naturally friendly person, who feels cut off by Irish reserve and socially excluded. She is seeking a husband, having decided to start a family. Circumstances are forcing her to engage with the wider society in a new way, and she must deal with the evitable conflicts, culture shock and misunderstandings.

Any Other Dublin is produced by Dead Medium, creators of The Invisible Tour Guide, the Emerald Arts and Been There Seen There. Written by Gareth Stack (visit his website where you can find other finished works: http://garethstack.com/)