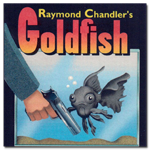 We continue our tour of radio noir by featuring a radio drama adaptation of Raymond Chandler’s “Goldfish,” the first Philip Marlowe short story, recorded entirely on location in the Pacific Northwest where Chandler originally set it. Harris Yulin stars as Marlowe with Harry Anderson as the lethal bad-guy “Sunset.” With an outstanding cast of Seattle actors including Peggy O’Connel, David MacIntyre, John Gilbert and Kevin O’Morrison and an original blues score, featuring Janie Cribbs’ torchy “My Lonely Love Affair.”

We go on to talk to Otherworld Media writer/director/producer Judith Walcott, who talks about how she met her to-be husband David Ossman at a radio workshop in San Francisco, and how mad nights cutting tape at WGBH led to matrimony. The pair has produced dozens of radio plays over the years; we talk about some of the innovative things they’ve done, how media has changed, and the future of radio drama in a ‘niche casting’ world.