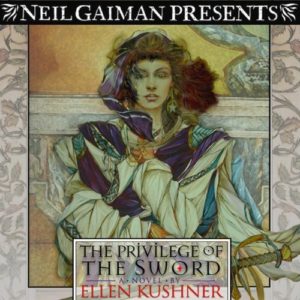 This week we celebrate the Audie-award win (Audio Drama category) of Swordspoint, written by Ellen Kushner and produced by SueMedia Productions.

Swordspoint is a tale of derring-do in the city of Riverside, where men live and die by the sword. We spoke with Ellen and Sue back in December about adapting Swordspoint as an illuminated audiobook, where key passages of the swashbuckling original fantasy are rendered with a full cast, music, sound effects.

Today, we have selections from the second Riverside book available as an illuminated audiobook from Sue Media – The Privilege of the Sword, also written by Ellen Kushner, and an Audie-nominee in the Multi-voiced performance category. We include the book’s intro by @neilhimself and the second chapter, read by Barbara Rosenblat and featuring a full cast and original music in the ‘illuminated’ sections.

We also talk about the HEAR Now Festival – coming June 20-22 in Kansas City, MO – which will premiering Neil Gaiman’s Neverwhere in the USA as well as featuring the world-premiere of FinalRune’s The Cleansed: Season 2.