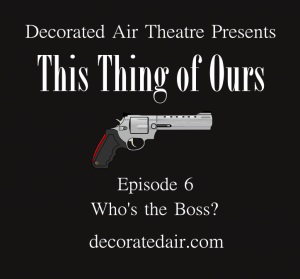 June is unofficially dubbed ‘mystery drama month,’ kicking off with a BANG with the 70s Noir New York Mafia Drama “Thing Thing of Ours” by Scott Spaulding’s Decorated Air Theater.

Tensions are high within the Colombo Crime Family as gunshots ring out a few days before Christmas 1977. The fella’s scramble to get answers and deal with the aftermath. Who got shot? Who did it? But more importantly…Who’s the Boss?

Jump in for a smooth-talkin’, knee-breakin’, wise guy flush soiree in the gritty streets of New York.