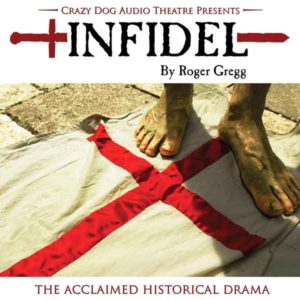 This week on the show we finish our summer sizzler – INFIDEL – the lush, medieval epic with a message for our times, penned by the great Roger Gregg of Crazy Dog Audio Theatre.

In Part 4 of 4, we are moved to “Stalemate,” where the Christian knight and Muslim “Infidel” cross enemy (or friendly?) lines, and confront the true nature of the conflict.  Is it the sacred or the profane that’s causing this war?

A few notes on the production of INFIDEL from Roger’s site:

Kicking off with the latest installment of the The Cleansed, featuring the revelation of a big secret (spoiler alert!!!).