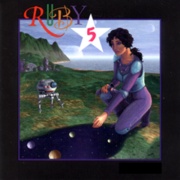 This week on the show we continue our feature of Tom Lopez’s ZBS Foundation with the fast-talking galactic gumshoe, Ruby. Our feature: Ruby 5.

The natives of the Awakening Archipelago turning their islands into a wacky world based on a story called The Land of Zoots. On one island they’re growing feathers on everything, trees, buildings, fireplugs, even themselves. On another, they have created Bubblesville, where the inhabitants live in round rainbow colored bubbles that float about… But the strangest thing is, the Land of Zoots never existing as a film, play, or book, so how did it get into everyone’s consciousness?

Ruby goes island hopping to get to the bottom of this, encountering en eclectic (and eccentric) band of characters along the way. All this sizzles in the hot sauce of Tim Clark’s wild Retro-Future Music.

We’ve learned that ZBS is working on the final Ruby – Ruby 9! – we’ll be talking a bit about what the new program has in store in the coming weeks.

First up, Chapter 8 of The Cleansed. We find out how things are progressing with Luke, Maria, and Prophet, while strangers approach the gates of the Refuge. Zeke, still gasping for breath, is delivered to the sewers – the “Soup” – and Saul asks John’s fractured rebels to make a decision.