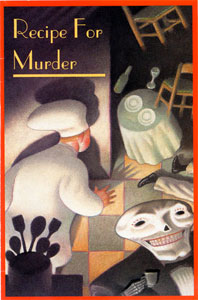 It’s October again, and as ever, is it HORROR-ible! OH yes, folks, we’ve got a 5 week stretch of terrifying audio goodies for you, starting this week with a fresh work by radio drama living legend Tom Lopez.

ZBS says of “Recipe for Murder”

The stories were recorded on location in Montreal, in the bistros, the sidewalk cafés, the cobblestones streets, in bars and back alleys, in cars, on buses, even on the subway. These mysteries are superbly sound rich.

Recipe for Murder is a co-production of the CBC and ZBS. In fact, Meatball Fulton did a lot of the recording and Tim Clark composed all of the music.

The Detective
Jean-Claude is a sous-chef and an amateur detective. He loves food (there’s mouth-watering descriptions one could die for), but he’s also very curious, and often finds himself in awkward if not life-threatening situations.

The Stories
In the first story, A Sweet Death, Jean-Claude learns the secrets of delectable, and deadly, hand-dipped chocolates. The second story, Buzz Buzz, centers on various delicious edible insects; Fugu deals with Japanese cuisine, and in The Ghost of Miz B, it’s the theatre and what may be the ghost of Sarah Bernhardt.

And It’s Free
Starting the first week of October, and every week thereafter, you’ll be able to hear another mystery from Recipe for Murder. It’s free.

We also whet your appetite for the undead with a preview of 19 Nocturne Boulevard‘s upcoming Dunwich Horror. Happy 3rd anniversary 19!