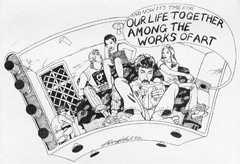 Today we continue the feature of the 1980 serial Our Life Together Among the Works of Art, a sexy and side-splitting serial that aired on WBAI, telling the woeful tales, struggles, romances, and substance abuses of a group of struggling young writers in New York City.

A story of the years of struggle artists go through before they make it big or give up. Phoebe’s unfocused ambitions land her in a crowded apartment on New York’s Upper Left Side with five roommates and their friends. George is a film critic paralyzed by deadlines, and his wife, Marceline, is tired of telling his editors he’s not home

Julian writes poetry inspired by unattainable men, while Red toils over the definitive science fiction novel. Jay spends his days in dark theaters, claiming that movies are as real as real life. Cecily, an actress on the soaps, must choose between Butch, a novelist whose radical sentiments are being eroded by his job at a mailing house, and the Narrator, whose voice of authority conceals a soul all too human.

We hear 3 of the 28 episodes today – more coming next week.