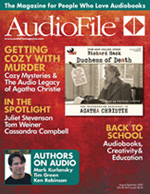 Things have been great lately for audio fans of Agatha Chrystie. Last month I mentioned how Audiofile magazine had a feature on the Queen of Crime, and bubbled in great length about how great the live Agatha Chrystie radio dramas at the International Mystery Writer’s Festival was. Killer!

But now there’s more – Audiofile Magazine, to celebrate Agatha’s birthday, is giving out a free audiobook of the Agatha Chrystie story “The Case of the Missing Will,” through a partnership with Audible and BBC Audiobooks America.

You do need to sign up for a form with Audiofile, but heck, if you aren’t already getting the magazine and their newsletters, what kind of audio fan are you? You’ll also need an Audible account, and the same rules apply.

Audiofile Magazine and Audible are both very audio drama friendly. While their emphasis is obviously on audiobooks, you’ll routinely find reviews for audio plays in Audiofile and there are great audio dramas to download on Audible (the Rocky Coast Radio Theatre, for example, and the 2000x series).

So check it out, while there’s time! The offer is only good until September 20.

Check out their landing page stuffed with great Agatha Chrystie material, or go straight to the download for the free audiobook.