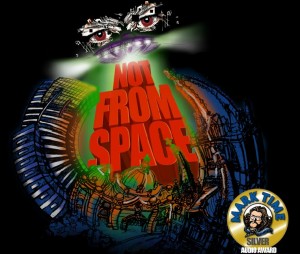 This week we feature the second half of the 2003 ‘radio movie’ Not from Space, a satire of commercial radio that pioneered the internet-era of audio drama and was heard nationally on XM Satellite Radio. Winner of the Mark Time Award and Communicator Award

This scathing satire of the advertising industry taunts you with a live radio broadcast complete with all-too-truthful commercials from a series of wacky sponsors you’ll grow to love. The station’s owner is Jimbo Thomas — always ready to weasel his way onto the airwaves just because he likes the sound of his own voice. Listen to breaking news as an assassination attempt unfolds and the sponsors seize the opportunity to cash in on the latest frenzy. Soon alien visitors arrive from a neighboring world, sending Earth’s two biggest corporate empires into the ultimate power struggle — fighting for control of the very station you’re listening to.

Also featuring a chilling scene from Season 2 of The Cleansed!