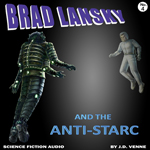 Sci-Fi February 2012 continues as guest host Captain Radio™ unleashes a super-sized podcast that treats our fans to the full-length stylized hard sci-fi excellence of Brad Lansky and the Anti-STARC.

Following that, we’ll hear an extended on-location (what else?) exclusive interview, featuring our own roaming host, Fred Greenhalgh, and one of the creative masterminds behind Protophonic production’s Brad Lansky sci-fi adventure series, Dieter Zimmerman, coming to you by recording from Cape Town, South Africa, where Fred’s somewhat reluctantly about to wrap up his enjoyable and memorable extended vacation to head stateside once more.