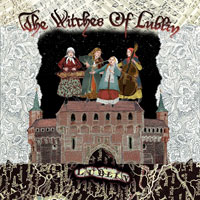 In our first ever Passover holiday show, today we feature the breathtaking original show The Witches of Lublin by Sue Media Productions, featuring a star-studded cast including Tovah Feldshuh, Simon Jones, Neil Gaiman and Barbara Rosenblat with a supporting cast of New York’s finest audio actors, and fresh music by leading klezmer musicians.

Drawing on traditions of Jewish folklore and mysticism, The Witches of Lublin, written by Ellen Kushner, Elizabeth Schwartz, and Yale Strom, weaves together history and myth with the struggle for survival of one woman’s family in an old world Polish city, and offers a glimpse into the lost Jewish women’s lives of Eastern Europe.

Set in the Passover season, The Witches of Lublin is directed by the award-winning Sue Zizza and features haunting vocals and an original high-energy klezmer score by Yale Strom.

First up, Captain Radio reviews two delightful audio programs for children – the new effort Wireless Theatre Kids by our friends at the Wireless Theatre Company, and Sophie’s Adventures in the Dark, a brilliantly sound design mixture of interactive audio and radio drama.